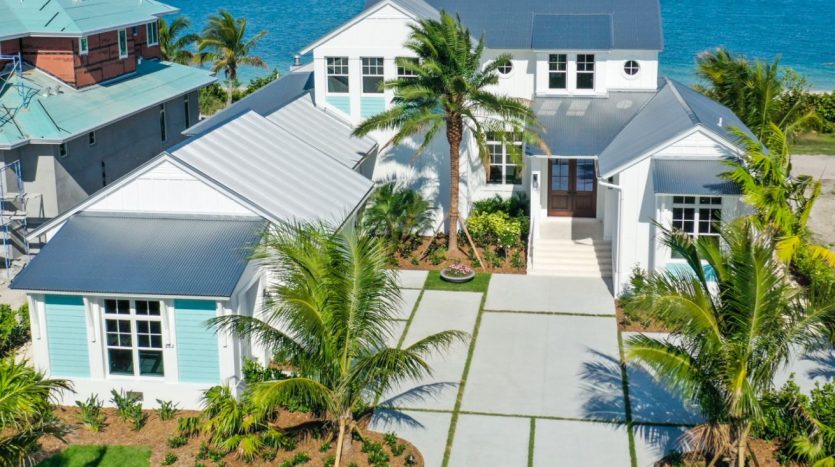 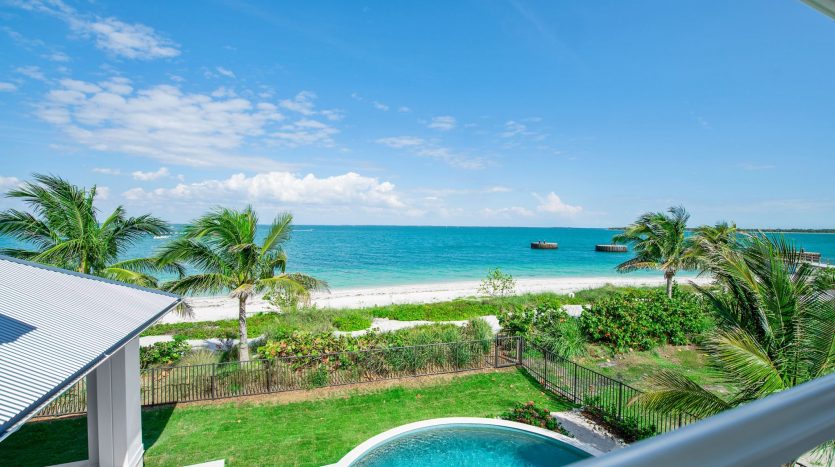 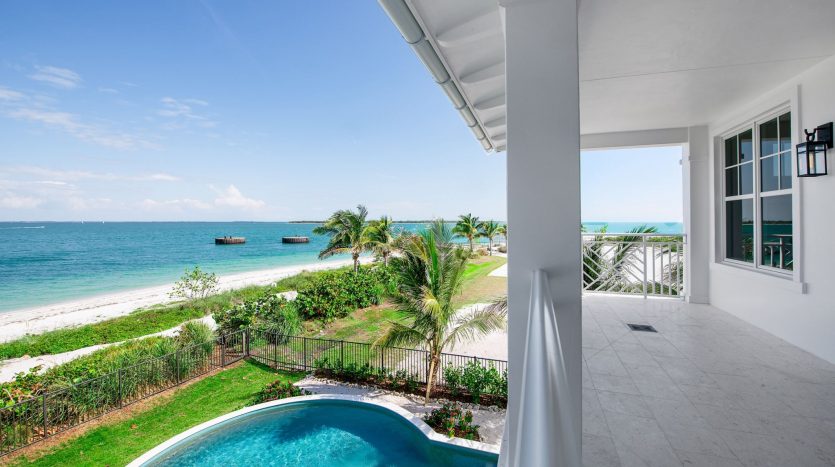 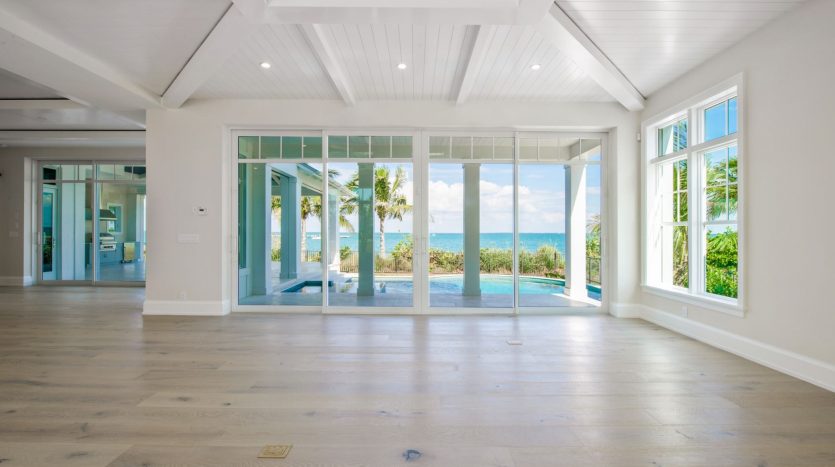 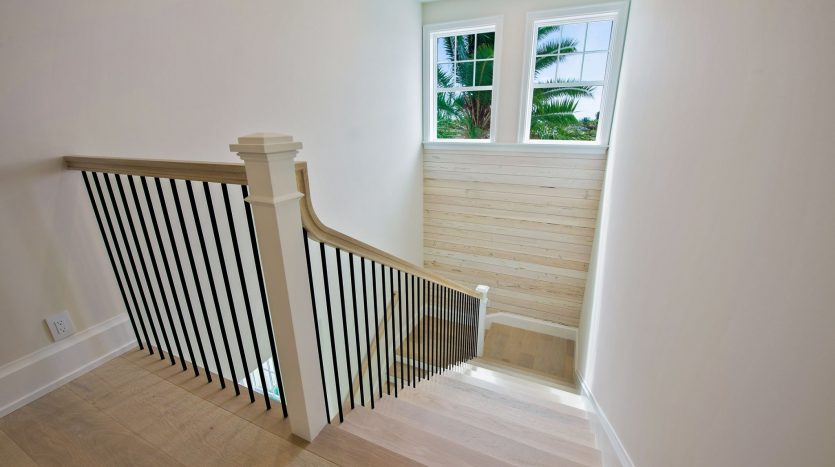 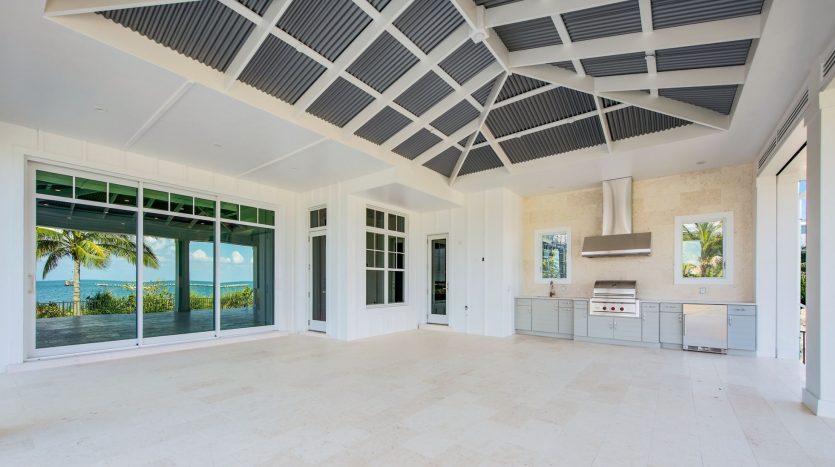 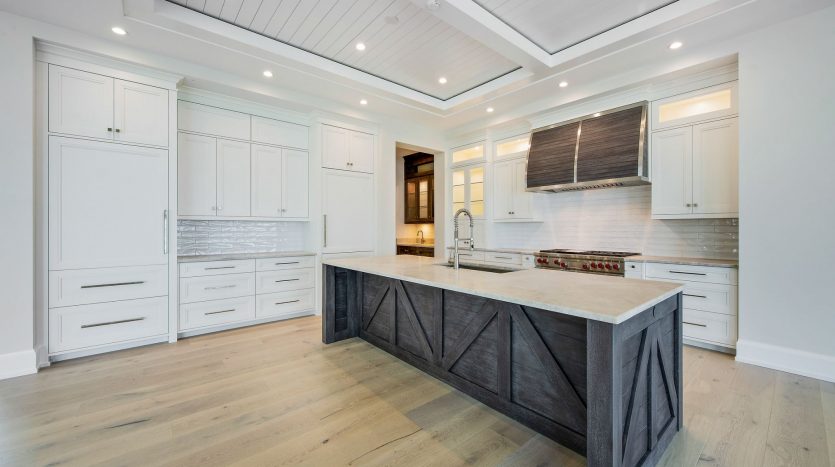 Scott Weidle had been eyeing the property on Boca Grande for years. 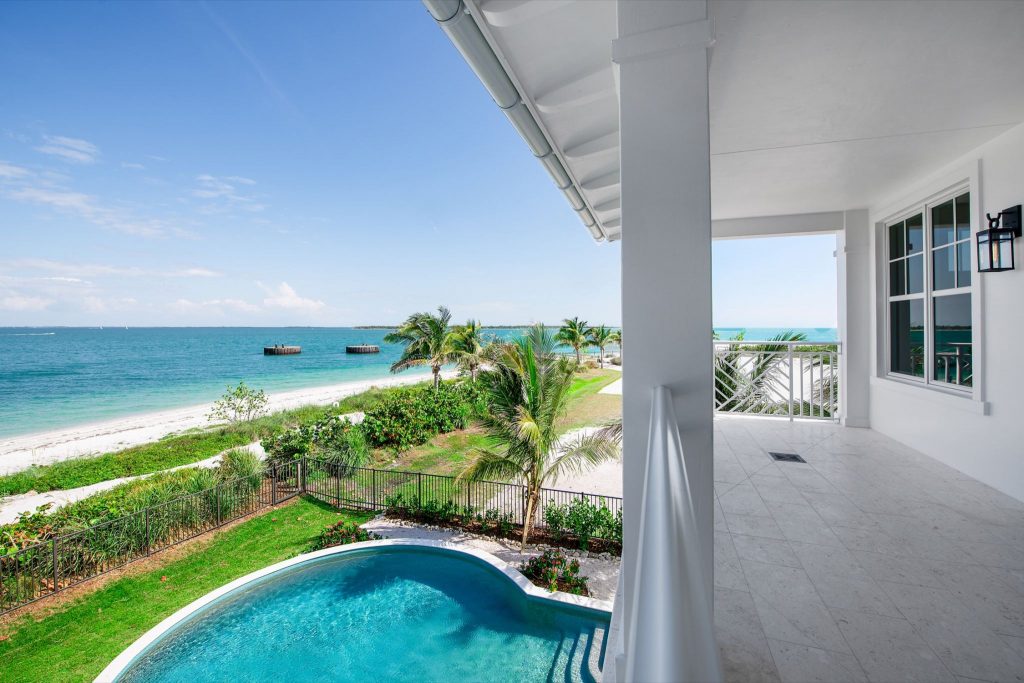 “I have a place in Bokelia, and I used to fish out here all the time and I kept looking at that land,” said the COO of BCB Homes. “So I said to a friend ‘call me if that property ever comes up for sale’.”

He was finally able to purchase the almost 10 acres of waterfront land from FP & L.

“We went for reduced density,” Weidle began. “We were allowed 30 homes, but we only want 19. We thought it was the right thing for the island.”

Now BCB Homes has just completed its first spec house in the community he calls Hill Tide Estates. The four bedroom, five and a half bathroom home faces the clear greenish blue water of Charlotte Harbor and Boca Grande Pass. The home was designed to showcase the views of the small beach and water.

“I love the fact that the outdoor living room is extremely close to the beach,” said architect John Cooney.  “When you are in the great room, the outdoor living area and kitchen, it feels like you are out on that beach. Anybody who walks in that house can picture themselves sitting there and watching the boats go by.” 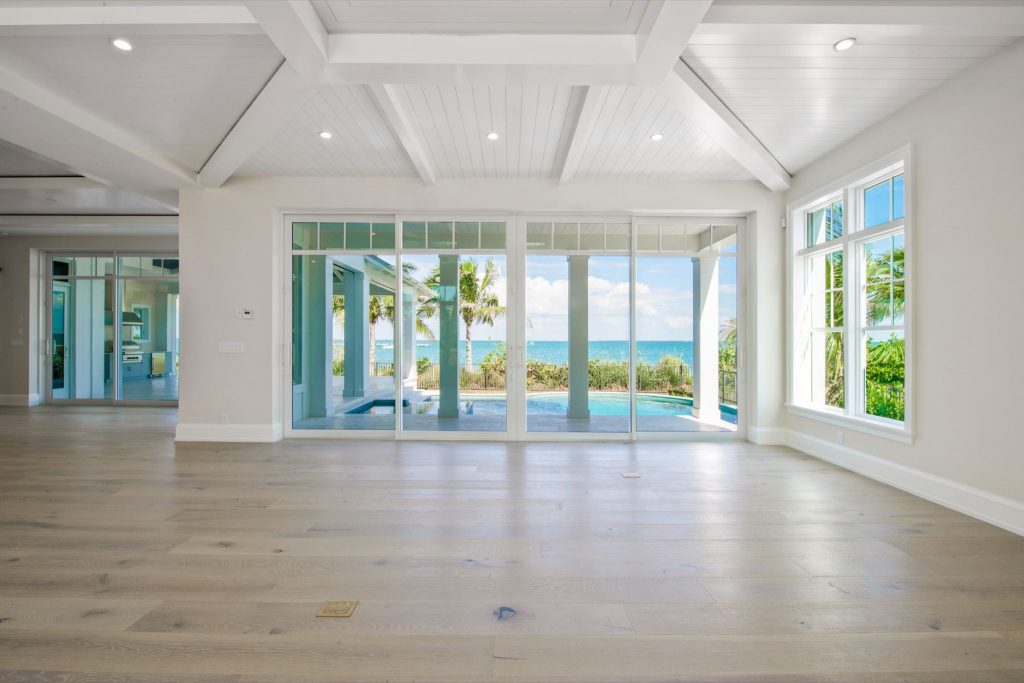 The unfurnished house is done is light colors. White nickelboard ceilings over light washed wood floors gives the great room a very bright look. The large space has two sets of sliders that form an entire wall of glass overlooking the pool and water.

The kitchen has an island with the only contrast of dark color shown in the barn looking dark brown wood that forms the base.

A downstairs master suite has a sliding glass door overlooking the pool and back bays.

There are two walk in closets and a bathroom with a stand-alone tub, shower, double sinks and a private toilet area.

On the other side of the great room is a bonus room that could become a fifth bedroom. That room has a large closet, a glass slider leading to the lanai, and a bathroom that is shared as a pool bath.

“It definitely can be a bedroom,” Cooney explained. “But I am finding that when I design great room plans, people are looking for another media/social room place. We call it a club room.”

The bathroom by the club room has a very unusual rustic look. The walls are made of corrugated metal above a wooden floor.

“The corrugated metal, we had never seen it before and we thought it fit the vibe of the house,” Weidle said.

The first floor also has a guest suite that is tucked away behind a secluded bending hallway. 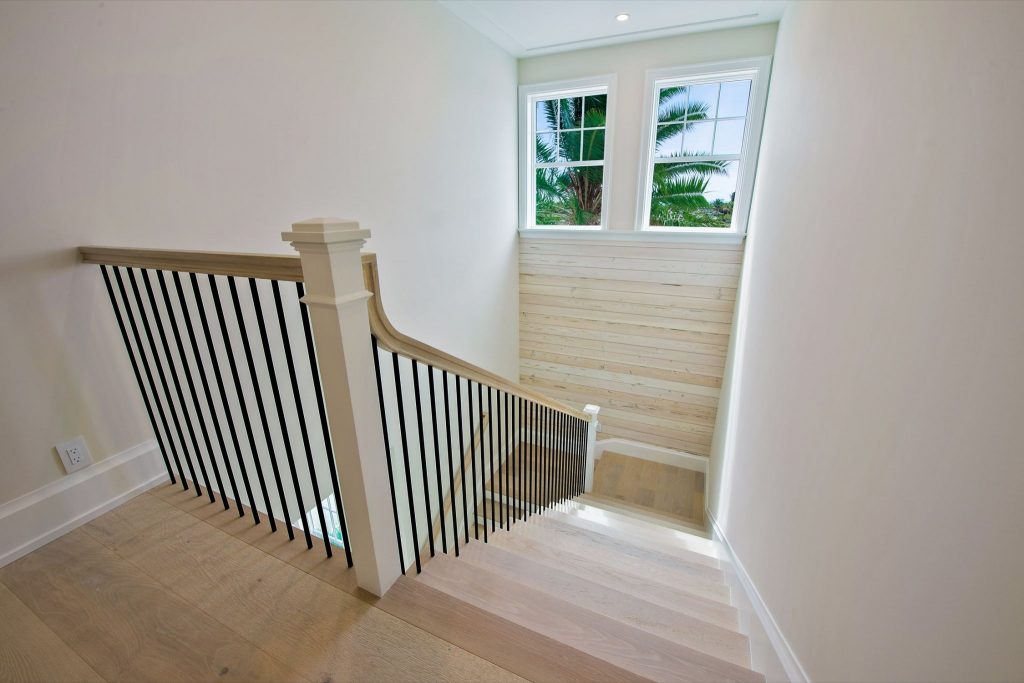 The staircase is not only an avenue to the second floor, but a showpiece of architecture. A wall of rough washed wood with windows above forms a backdrop to the stairs.

On the second level are two more bedrooms. Light washed wood beams form a frame to a peaked ceiling in one of the rooms. This room has glass French doors leading to a terrace overlooking the beach and water. With two walk in closets and a large bathroom with a stand-alone tub and a shower with a glass wall and wood floor, two sinks, and a toilet room, this room is a second master suite.

“I did that purposely so whoever buys the house has the option to either go upstairs or downstairs,” Cooney explained.

The guest bedroom, that also has a peaked ceiling, has four windows overlooking the pool, beach and water.

The upstairs also has a very small front room facing the street. Weidle said it can become a second laundry room, a tiny study or a craft room.

Outside, half of the lanai is under roof while the other half features the pool and spa.

The metal peaked roof covers the outdoor kitchen with its Wolf grill, sink and refrigerator. The ceiling is made of aluminum that looks like galvanized steel but will hold up to the environment there, Weidle said. 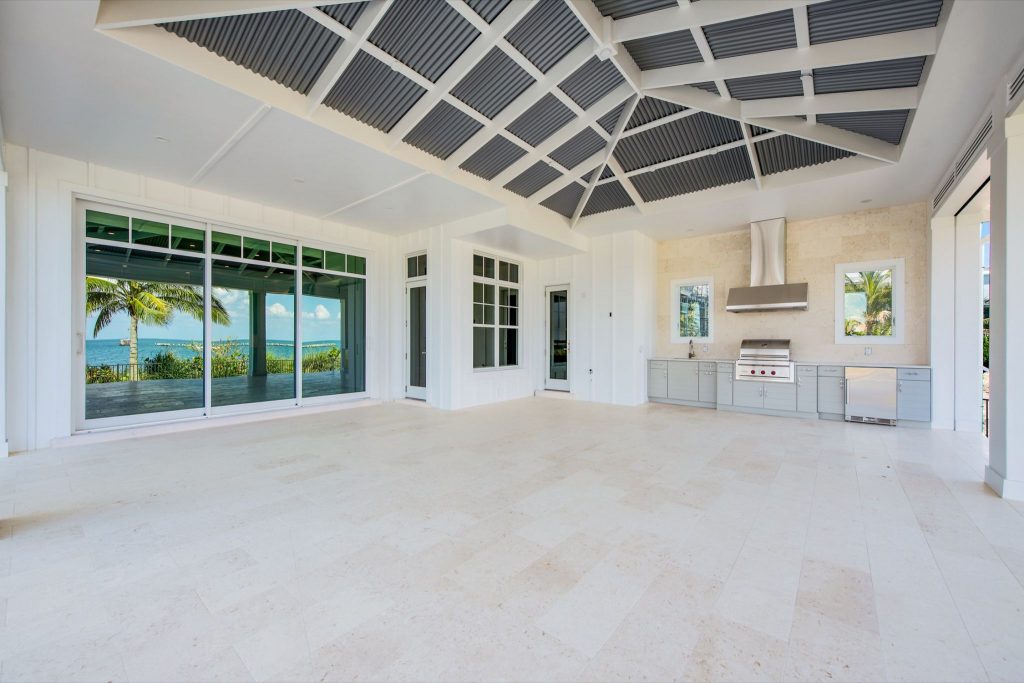 “My favorite feature is the outdoor living and the roof structure over it,” Weidle said. “We thought that was completely different.”

Between the lanai and the greenish-blue water, is marsh grass, sea grapes and a small beach.

“This pass has so much water volume, the cleansing is like nothing you have never seen, and the bottom is a lot more sandy so it tends to settle down a lot faster,” said Weidle as he explained the amazing color of the water.

It took a lot of work to make the land ready for building. Weidle said there were 70 foot tall Australian pines covering the property.

“ It was like sitting down in a bowl,” he added.  “We had to fill almost 5 feet. That was quite a project.”

Weidle said they chose not to furnish the home so the buyer can have flexibility.

“We set this up where they can take it coastal or transitional,” he said. “We are not planning on furnishing it so the homeowner can take it any way they want.”

Howard Witt, who has lived on the island for 15 years, is happy to see the improvements.

“We saw it with all the oil tanks before,” he described. “This is a very good conversion from what it had been: a very industrial site. This is probably the last buildable property on the island. From an island standpoint this is definitely an upgrade.”

Witt enjoyed touring the home and liked the design.

“It is a little unusual,” he said. “It ties into the beaches. I think they are doing a nice job. The interior design is phenomenal. We like contemporary architecture. We like the open feel. It has a very nice use of tile and color.”

Charlie Shea, of Colorado has been coming to Boca Grande since 1975. 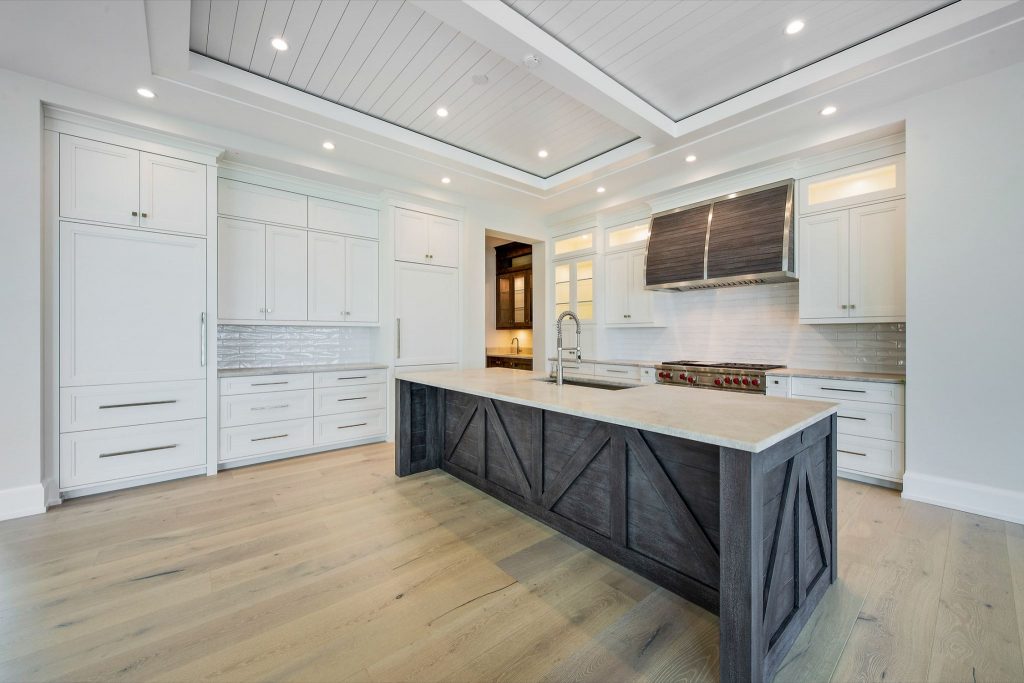