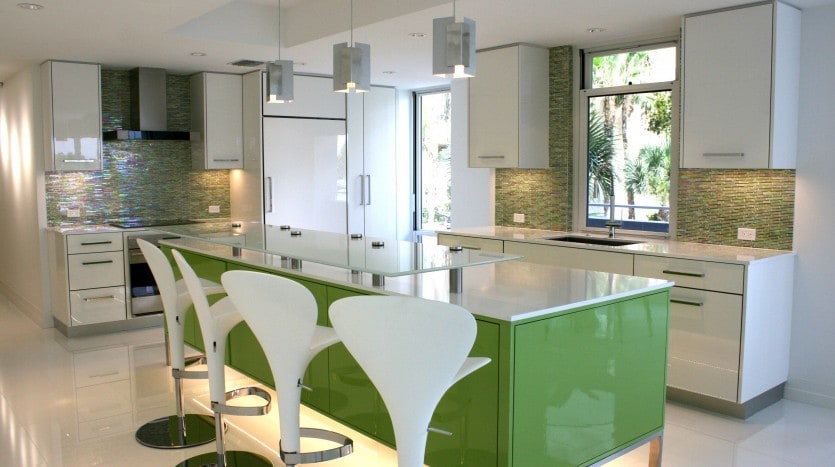 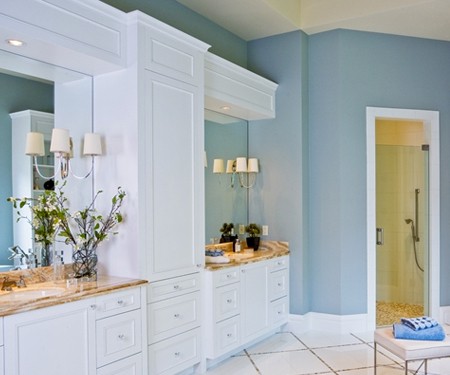 After completing a floor-to-ceiling  renovation, the last thing most homeowners want to hear are things like, “I wonder why they wanted that?” or “When are your window treatments coming?” But Naples condo owners Don and Mary Kosch have gotten used to it, knowing when they remodeled  the Gulfshore Boulevard residence it would be unique.

“We didn’t want the typical Florida look and we didn’t want ordinary,” says Don, president and CEO of the Dearborn  Sausage Co. in Michigan. “Ordinary is boring. We wanted something exciting and different.”

They met the challenge  with flying colors- or color, as the case may be.The all-white interior is breathtaking,  with an unembellished style that either reflects the future or provides a backward glance through a mid-century  modern lens. Either way, the look is decidedly minimalist, with spare but sufficient furnishings, few accessories  and zero knickknacks.

Color is also used frugally, making the selectively-placed green and blue accents all the more vivid and surprising,  the whites all the more brilliant.

What’s especially noteworthy  is the consistency of the pure white color scheme. That’s an incredible feat in an environment in which even the slightest color variation would stand out like a yellow front tooth in a mouth full of pearly whites.

Everything matches seamlessly,  from the bright white polished porcelain floors and doors, to the walls and ceilings, layered crown and base moldings,  custom cabinets and imported leather furniture.

The result is ultra contemporary,  ultra sleek and over-the-top chic. It’s also unexpected. “People are kind of surprised when they see this place because many times, people’s taste will carry over from one home to another,” says Don, noting that this is nothing like their other homes.

In addition to their primary residence  in Dearborn, Mich., and a summer home in Harbor Springs, Mich., the couple has bought, remodeled  and sold two other homes in Southwest Florida over the course of their 181/2-year marriage.

The first was a Gulf-front condo on Sanibel and the other overlooked  the golf course in The Forest Golf and Country Club in south Fort Myers.

“We’ve never had a home that was really ultra-modern  like this one,” says Don. “It has a peacefulness and simplicity about it.”

Designing a snow-white  interior was not a factor in the Kosches’ decision to purchase the three-bedroom,  two-bathroom condo in 2011. In fact, they liked it as it was- a corner unit on the water, with great views and proximity to world-class  amenities.

As members of La Playa Beach Club next door, the Kosches have access to its golf course, clubhouse, swimming  pools, restaurants, hotel, private beach and much more. For the blended family of six children (the youngest of which is daughter Abigail, 17) and nine grandchildren,  having various activities within walking distance comes in handy during visits.

“They can just walk across the street, stay over there all day and be entertained,”  says Mary. While a remodel wasn’t in their initial plans, the Kosches reconsidered in early 2013 when the penthouse in their building became available.

“We thought we wanted something a little bit bigger, plus it had a panoramic  view,” says Don. “So we went up to the penthouse  about three times and then we’d come back down here and compare them. We didn’t want to remodel until we were sure that this was what we wanted.”

Familiarity and the lower-floor  view convinced the Kosches to stay put and remodel the space.

“For us, this is just like being in a home. If you’re up high and you want to see the beach, you have to go to the window and look down,” says Don. “But here when you sit down, you can see kayakers and boaters, and the homes across the water. We like that.”

It was Don’s idea to go for the ultra-modern,  Italian-influenced design style, which is more of a high-gloss, high-tech look than the Scandanavian  style. Mary says that while she would have preferred wood floors out of fear that their grandkids  might get hurt on the unyielding porcelain surface, she happily deferred to his wishes.

“I did our cottage up north and besides, he spends a lot more time here than I do. It was his vision,” says Mary, who quickly warmed to the cool look. “Actually, Don is such a perfectionist, I am grateful that I was not the person who (had to make all these design decisions).”

Because their homeowner  association only allows construction  in the off-season,  from May until November, Don had to work quickly. To meet the tight deadline, he hired BCB Homes in Naples as the general contractor.

Although he consulted with Mary before making any final decisions,  Don made most of the design choices.

“We had the luxury of living here for two years before we started remodeling, so we knew how we wanted things,” says Don. “That’s why I didn’t have to run down here (during the renovation). I had a photo of this in my head,” and the benefit of experience. Nonetheless, he admits he spent a lot of time scrutinizing every detail.

Den’s overall objective was to design a streamlined space devoid of all clutter, particularly  in the master suite. There, he wanted to create a spalike environment. “We wanted serenity and simplicity,” says Don. “But we didn’t want it to be too simple-we wanted it to be funky simple.”

The undivided master bedroom and bathroom unequivocally accomplishes this mission. At first, Don considered dividing the two spaces with an LED glass wall that could change from clear to obscured glass at the touch of a button.

“But then I wasn’t sure that I even wanted a wall. That’s when we decided to keep it open,” he says. “But when you do that, you can’t make a plain Jane bathroom.”

Not to worry. The extraordinary space has a number of striking elements ranging from sculptural hardware to LED lighting to suit any mood. In the bedroom, silver-toned  wallpaper adds subtle contrast to the white-on-white  space. Imported from England,  the wall covering contains tiny, hand-set crystals that glitter like stars in natural or man-made light.

There’s also a two-sided stainless Planika fireplace with a white porcelain surround.Noteworthy features of the bathroom include a glass-tiled shower with frameless enclosure; double vessel sinks with wall-mounted  Graff faucets and surface-mounted hot/cold levers on the vanity; floating mirrors flanked by illuminated  frosted panels; and laminated drawer fronts and wall accents in a driftwood finish.

Beyond the wet area and water closet is a series of what appear to be high-gloss lockers that are actually custom, porcelain-front  closets with built-in drawers, shelves and hanging rods. There and throughout the nearly 2,300 square feet, “everything  is custom-custom,” including the kitchen and bathroom cabinets, and the massive white ash coffee table in the great room.

It took four months for northern Michigan artist Pete Cummins to make the commissioned piece, which appears to be carved from a single piece of driftwood.Otherwise, most of the furniture and all of the porcelain  built-ins and interior doors were imported from Italy. Don and Mary personally picked out the Italian leather seating in New York.

“Modern furniture can look really cool but often, it’s not very comfortable,”  says Don. “I needed to know how (the seating) felt and functioned. I want comfort.”

Now that the construction  has been completed, the Kosches look forward to adding a few finishing touches- eventually.

“Right now, we just want to enjoy the season,” Mary says. “After a day at the beach, entertaining visitors and interacting with people, it is so beautiful to walk in that door to … this. It’s so peaceful. We love it.”