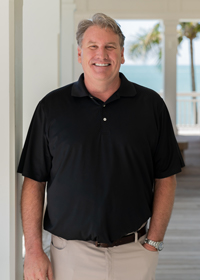 Chuck Rainey is a Vice President of BCB Homes, Inc. Chuck currently manages all of the Project Managers and oversees the projects that are currently underway. Over the past two decades with BCB Homes, he has built over 70 homes and has remodeled over 10 for the company.

Chuck came to BCB Homes with a construction and law background. He graduated from the University of Florida with a degree in building construction in 1988 and then went to work for the largest commercial construction company in Florida. There Chuck worked on airports, high rise office buildings, as well as projects for Walt Disney World and Universal Studios.

After two years in commercial construction, Chuck returned to the University of Florida and earned a juris doctorate from their law school. He then joined the Florida bar and practiced as a lawyer for a short time. Chuck moved to Naples, Florida in 1994 where he decided to engage in the construction industry once again and joined BCB Homes shortly after it was created.

In Chuck’s free time he enjoys spending time with his wife, Allison, and their two boys, Conner and Caleb.