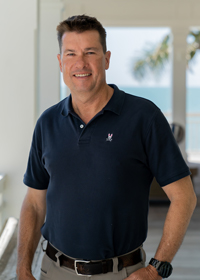 Joe founded BCB Homes, Inc. in 1993 as the President. Since then, Joe has led the company through a significant period of growth establishing BCB Homes, Inc. as one of the leading contractors in Southwest Florida. In 2007, Joe became the President and Chief Executive Officer of BCB Homes and in 2018 Greg Brisson took on the role of President of BCB Homes to work with Joe to run the 150+ person company.

Joe’s primary duty is working with each homeowner to build the best home possible in Southwest Florida. Joe attends homeowner meetings on a regular basis; from the beginning of the job where the entire “team” meets to create and design the client’s home, to the conclusion of the job when the owners move in to their new home and call him when they need assistance with maintaining and protecting their beautiful home.

A Naples native, Joe graduated from the University of Florida with a Bachelor of Science degree in Civil Engineering. Joe returned to Naples where he worked at Boran Craig Barber Engle Construction for approximately six years and was promoted to become an owner of the commercial construction company before founding BCB Homes, Inc.

Joe is also a member of the Young President’s Organization of Florida. Joe also serves on the Board of Directors of the First Florida Integrity Bank since its origination in 2008. In Joe’s free time he enjoys spending time with his wife, Mary, and their two boys.  He also enjoys hunting, boating and family vacations.